Lovelite brings an energetic infusion of euro-pop sensibility and lyrical depth to the congregational worship scene. Led by the husband and wife team of Andrew Polfer  and Jen Polfer, two worship leaders inspired by the thought of reshaping the mundane, the band’s anthem, and atmospheric style. There lies a foundation for its heartbeat: to share in the character of God’s creativity. Other members of the band are Brandon Burr and Jonathan Hall.

JP:“Yes, I grew up in the Los Angeles area and Andrew in San Obisto in the California cities/ We both now live in San Diego.”

I:We should talk about your growing up, were you brought up in a Christian home?

JP:“I did. Both my parents are worship leaders. I grew up around a lot of music in the Church. I spent a lot of my time hanging around church while my parents played worship.”

I:It was pretty obvious that you were going to be a worship leader?

JP:“I think so. I definitely had music around the house and was encouraged to do that.”

I: Who else inspired you apart from your parents in terms of worship? What type of stuff were you listening to?

JP:“I grew listening to Christian music although the first album I bought was the Cranberries. So that singer definitely influenced me in my start. Also I really enjoyed some Christian artists like Jennifer Knapp in the 90s; I listened in to True Rock which was a Californian radio rock station. In the 90s that is the style I based myself upon and I took that style into my youth worship group.”

I:Was that ok to do? Or did you cause some controversy by trying to do that?

JP:“Ah no, it was ok. I had a pretty good youth group and youth pastor who wanted to encourage everyone to be who they are. And with my style of music he said I want you to lead with personality and what you do.  Over the time I found my voice with that Cranberries-esque type and style and the voice is what got me started today.”

I:So in terms of meeting Andrew that happened at High School, did it not?

JP:Yes, we met very young when I was a junior.  We started off as friends playing music together and the romance budded from there.”

I: I love a good love story, what did you think of him when you first met him?

JP:“I really enjoyed his personality first off.  Our first conversation was talking about guitars, music and worship.  We actually met for a conference called ‘True Love Waits’ geared towards young people who were saving themselves for marriage and that’s how we met so that was perfect, He really has a good sense of humour really funny. I love being around his quirkiness. “

I:You and Andrew are co-leaders of this band. You met at High School, got married and formed a band that seems which seemed an eminently sensible thing to do. How did the band form from marriage?

JP:“Originally we used to do a lot of  folk-style music, they were not necessarily worship songs but they did have Christian-style themes.  After driving back from a venue we both said we had a really good time but what we really enjoyed the most was worship music.  We prefer the vain of the music where the lyrics are horizontal rather that vertical.   We figured that we love music that is from our heart and directed straight to God.  Andrew was at college at the time when we wrote our first worship song together.  The worship leader from the Christian college at Azusa South Pacific University started playing the song in chapel and people caught onto it straight away.  It was such an exciting and moving moment, we got together with some friends and producing songs from Andrew’s arrangements.  I don’t think we sat down and said let’s call this band Lovelite, it just came into being.  That was eight years ago and we are still going today.”

JP:“It came from the book of Ephesians where the passage talks about you were once darkness, but now you are light ….. And walk in love. We had to rearrange and change the spelling in order to come out up with Lovelite.

I:Did your popularity grow organically with all the immense support at college?

JP :“It started off as fun.  However there was a time when we shifted with more intention. We used to get together once a week and just play songs. Our keyboard player had a tiny one bedroom apartment.  We set up everything in there including all the Amps and drums; he nearly got kicked out. When we started out we were playing people living rooms then we went onto performing in Church’s.  Now we are more focused and still very happy at what it is becoming.” 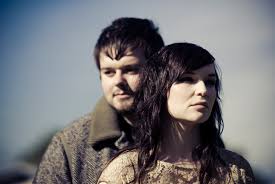 I: Andrew Polfer from the band Lovelite is my guest today, we at Cross Rhythms have been playing “Hearts Start Beating” quite a lot.  I would like to know about the song writing process within the band itself.  Because of you and your wife Jen the whole collaboration started before you were married because you were writing songs together.

AP: “Often at times when we were working on a song I would have a melodic idea, the chord structure and just the general flow of the song. Jen often works as an editor and helps bring my thoughts to a much stronger point where it is clearer to every listener and not just me.  So she has been very helpful in making songs with the ability for all to hear and the lyrics easier to grasp.”

I:So tell me about the process of ’Hearts Start Beating’.

AP:”We have been staying at a camp for the past two years so this was directed towards high-schools. We really just wanted an energetic song that was a collaboration of what God has done and that amazing idea was around the death of Christ which brings us to life and outside the church that very interesting idea doesn’tmake a lot of sense. One of the best truths of our faith is that sacrifice brought us to a point where we can celebrate and where we can have freedom.”

I:So is this a big song for you? Is it a significant song out of all the songs you have written?

AP:”It seems to be catching on and it doing well as far as gaining listeners. It is a lot of fun to play inside the church when we lead it in our worship serviced. The band love playing it and love singing it within the Church.”

I:What is the future like for Lovelite? What do you want to try and achieve next?

AP: “The immediate future is we have a baby on the way in about a month and a half, so we’re excited for that and excited to see where the next stages lead for us in that area.  We have some new songs which we are working on and finally, we thank you for playing our song.”

I:Why use Euro-pop as a style, that’s not really the normal way making working music, is it?

AP:“For me there is something emotional and nostalgic about that style.  I am a child of the 80s.  I like John Huhges films like ’Sixteen Candles’ and the ’Breakfast Club’ were an influence to me as a child.  I liked bands from the UK like ’Tears for Fears’, ‘Elbow’ and ‘Doves’.  These bands speak to me more from an artistic point of view rather that the stuff here in the USA.  It has always excited me and I connected to it emotionally just like a lover of music would be.  This music I connect with is based upon love and hope and not necessarily in the eternal form.  . I thought that it would be an incredible thing to marry those emotive and dynamic musical styles and to bring it to an internal mind set.”

I:But isn’t there a danger that if you are to create worship music like this that the music you are creating is too creative for that scene for you to succeed in that scene because it is too good in that scene.

AP:“Thank you! Thanks very kind.  Hopefully our music is from the too-good stand `point.”

I:When it comes to style of music there is a lot of worship music out there which is pretty banal and generic.

AP:”Benign worship music can often create broad strokes as opposed to the finer points and details; I know that the generation that I am from desires us to bring a little more artistry and creativity into the church because we have a very creative God.”

I:How creative are you being?  You are obviously sucking up a lot of European influences and re-hashing them for worship. In the same way people have re-hashed U2 and Coldplay over the last 10 years or so.

AP:“You can water down lemonade so that it becomes a watery form of water and sugar. For analogy sake that source of mixture is the purest and strongest form.  Our hope is to take these influences that are often sub conscious and by putting them together this will make a unique expression.  Lovelite are not sitting there  in the studio saying here is a Tears For Fears or Shakers sound lets create it right here for the next song. When in the studio we say to ourselves, ‘where does this song need to go?  For us as artists, hopefully, it’s honest.  We do not want to be puppets or just mimicking what others have done before us.  However it is hard not to let those aspects show and shine because they have become a part of us.”

This site uses Akismet to reduce spam. Learn how your comment data is processed.

@city_gates Thank you for the card from Pastors Steve & Julia.
Saddened by the news that Samuel Oji has passed away age 35. A graduate from Arsenal's academy, he was loved by coaches and teammates alike," Arsenal said in a tweet...
Foreword by #przfm @prayerrallyzone - “Jennifer is an author and campaigner with entrepreneurship. During the pandemic, Jennifer works as a point of contact for a NHS organisation. Jennifer also provides pastoral care to athletes as an independent  sports chaplain. Her slot on PRZ FM 109.2 has a christian theme for everyone.  Her productions currently schedule on  Saturday mornings 9.30am to 10.00am (as advertised). The talk-show  includes songs of worship, words of wisdom, animation & music that is good for the soul”. **Advertising Opportunities Available** enquire via contact@healingrelationstv.co.uk
With @paula.thorne80 11 years ago. Divas of colour serving the community.
Looking back at the time when I was a local leader, around this time of the year, for #London2012
“All the best on Sunday”

Visit Healing Relationship PR at one of these social media networks.